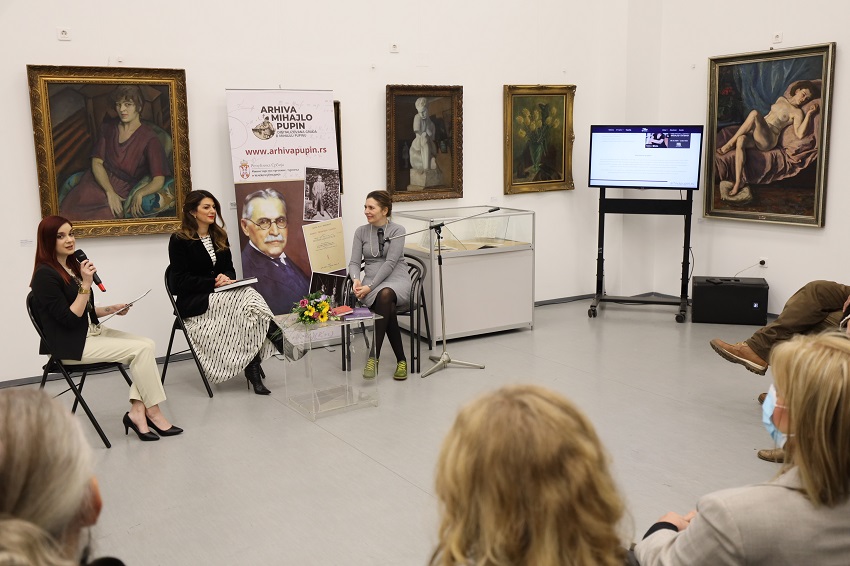 An exhibition dedicated to the promotion of digitized archival material about the great scientist, patriot and philanthropist Mihajlo Pupin was organized in the Gallery of the Radio Television of Serbia in Takovska Street in Belgrade on December 10, 2021.

Under the auspices of the Ministry of Trade, Tourism and Telecommunications, an ambitious project of collecting and digitizing archival material on the life and work of the great scientist and patriot Professor Mihajlo Idvorski Pupin, authored by Aleksandra Ninković Tašić, was realized. The project was presented on Friday, December 10, in the RTS gallery with a mini exhibition of original and exclusive materials about Pupin from the personal archive of the author of the project.

The archive on the arhivapupin.rs portal provides an answer to the question: "Who was Mihailo Pupin?" Who was our Idvor shepherd who changed this world? If you go through over 10 categories of material, you can see Pupin's immeasurable work. From the Archives of Yugoslavia, the Archives of the City of Belgrade, the archives of the FBI, the archives of NASA, Columbia University, huge archives of the print media to the relationship between Pupin and Tesla. So far, no prominent documents have been made public.
The legacy represents a treasure that does not exist in the world of archives. No one has ever collected such different documents about one legacy: through letters, telegrams, proclamations, they bring us a really convincing picture and the answer to the question: "Who really was Mikhail Pupin?"

The Minister of Trade, Tourism and Telecommunications, Tatjana Matić, and Aleksandra Ninković Tašić, the author of the project, addressed the RTS Gallery as the sponsors of this project.

The exhibition includes: a purse in which Pupin received a newspaper in the America of Dreams with his name and initials, a calendar that Pupin sent to soldiers on the Thessaloniki front in a circulation of 10,000 copies and some of the many works financed and supported by Mikhail Pupin, including I am especially publishing the Monograph of the Manasi Monastery, which is financed and printed by Mihajlo Pupin from his fund.